Afternoon Thought: Fuck the British Empire and the Queen 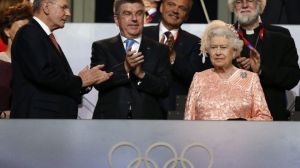 I hate the Queen. I hate royals. I hate the concept of royalty, which is basically the reason we had slavery and imperialism and colonialization and all the horrible things that happened when the British Empire pretty much owned the planet, creating havoc, death and chaos, the remnants of which are still found today with the entire continent of Africa being in shambles and occupation of Palestine and whatever else the consequences of British imperialism that made claims to world power were. I find it insulting having to watch this hag, who represents all that, open any ceremonies and give her blessing to anything. Fuck you Queen Elizabeth and everything you and your free loading British royal family stand for.

This entry was posted on July 28, 2012, 1:31 PM and is filed under Everything. You can follow any responses to this entry through RSS 2.0. You can leave a response, or trackback from your own site.