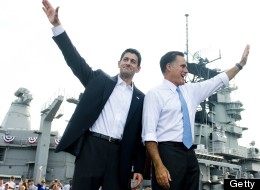 In a move reminiscent of a terrifying episode on the Twilight Zone, Mitt Romney  – the poster child for greed, dishonesty hypocrisy and the end of the American Dream – picked Paul Ryan, a callous cut throat politician with ethics a notch underneath that of a child molester, and whom Obama accused of favoring a “thinly veiled social Darwinism“, as his presidential running mate. And with that an unholy alliance; a match in political hell, is born.

Romney couldn’t have picked a better person for the job, as Ryan personifies every bit the things Romney stands for but is just too clumsy and inept to put in a coherent sentence.

So in a nutshell, here are some facts about Paul Ryan which, one can only hope, the American people will take into account when casting their vote this November.

So here is Paul Ryan for you. A contemptible jerk who loves to go after the poor and the unfortunate. A cowardly, callou fresh of the boat rodent ready to ruin the United States, one legislation at a time and a smirk on his face.

What Romney and Ryan, the Dystopian Duo, want is really a return to the Robber Baron age of unregulated capitalism and social Darwinism where millions suffered in extreme poverty without access to food or medical care and where elders were forced to live with their children or in extreme poverty.

Moreover, the trickle down economics he so much favors used to maybe work at a time when people didn’t have to be billionaires. In today’s economy, however, nothing trickles down but more work with less pay.

The assumption, of course, is that the American people are wise enough to understand the truly disastrous and detrimental direction these two will take us and thus not vote for this ticket.  Given two terms of George W. Bush that ultimately ruined our economy and just the systematic way people in this country keep voting against their own self interest, that is an assumption I am not willing to make so easily.

This entry was posted on August 11, 2012, 4:06 PM and is filed under Everything. You can follow any responses to this entry through RSS 2.0. You can leave a response, or trackback from your own site.